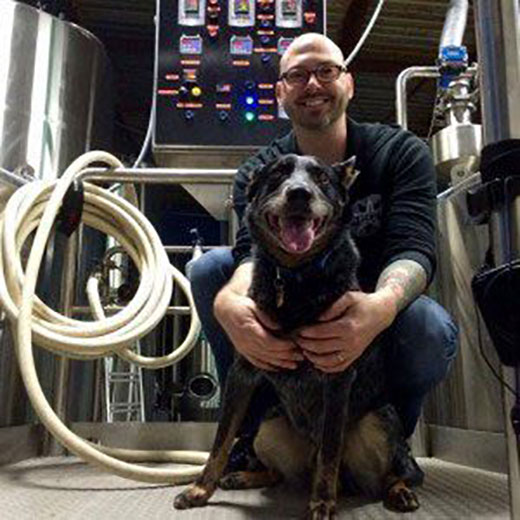 We’ve now been open about 6 months and have had an awesome ride.  Four core beers, a collaboration sour double IPA, our first seasonal experiments (Dapper Devil and Saison Puede), a gose (Little Gose) brewed by the lovely ladies of Pink Boots, and even the occasional “Tiny Barrel Series” release in our taproom.

We finally got Professor Black in a can.  It wasn’t easy.  Our can manufacturer dumped us with the rest of the Craft Beer industry right after we opened and we had to scramble to find someone else to print our cans for Professor Black.  But even then we found early on that our recipe for Professor Black wasn’t exactly stable in the keg.  It continued to re-ferment out all the cherries and begin to over-carbonate the keg.  Imagine if we put that into a can…Professor BOOM!  So we had to totally redevelop the recipe to retain what made the beer so good and popular in the first place, but also make it stable enough for sitting on a shelf at a corner store.  The long and short of it is that PB takes a fair amount of sweetness to help balance all the bitterness, sourness, and roastiness.  So to keep the beer balanced without making it a canned-shaped-bomb, we are adding milk sugar (lactose) during the brewing process.  I have to say it tastes wonderful…perhaps better than before.  However, if you’re lactose-intolerant (like I am), you may not wanna drink this one on a first date.

One of our beers is having to go from a year-round beer to a seasonal beer.  Van Dayum!, loved by many, was our slowest seller and tended to slow down the production of all the other beers (limited tank space and all).  It pains me to tell you this, but it was necessary to make sure that the other three core beers, (Little Boss, Spirit Animal, and Professor Black), could all be made enough so we stop seeing the sad, empty shelves at the corner store with a Spirit Animal price tag, but no beer.  Which brings me to my last update…

We have hired another brewery worker and have increased our production!  Starting in March, we are now able to hopefully keep up with demand better.  We’re not trying to be the hard-to-find special sour beer…we want to be your every-day sour beer or the sour that you introduce to your friend that’s never had one but realizes the previous 20-ought years of his/her life have been wasted from lack of sour beers.  Here’s the catch though…for us to hold up our part of the bargain and produce more of these beers, you have to do your part and drink the crap outta them!  Warm weather is here/coming/gone/coming back and the sourness we impart into the beer styles you know and love creates a wonderful, refreshing tartness that pairs great whatever-the-hell-you’re-doing-at-the-moment.

Thanks for continuing to support Blue Owl.  Oh, and come to the brewery and play me at ping-pong…I will crush you! -Jeff