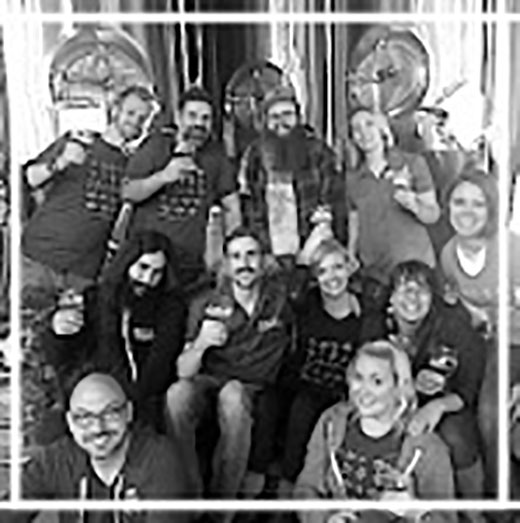 What “Sour” Means to Blue Owl. A Look at 10 Sour Beers… and What’s Next

I’m proud to say that we’ve made it through a whole brewing year and have explored the possibilities of what delving head-first into sour beers really means. We owe a huge thanks to everyone who has supported us, become fans, and been a part of this project with us. Without you, we’re just a few nerds and a pH meter! And without my team of creative, passionate brewers and cellarpeople, I’m an even lonelier nerd with a pH meter.
This whole thing has been quite a challenge and quite a risk. Doing 100% sour-mashed beers was very enticing when we started Blue Owl. Very little information exists on sour mashing at all, let alone on what challenges reveal themselves when trying to do it exclusively. We didn’t have a super clear picture of what Blue Owl was to become. We had our core four beers that formed a foundation of where we might go: a sour hoppy beer, a light sour wheat beer, a malty sour beer, and a bit of a wild card with our sour cherry stout. I think folks are pretty familiar with them now, but if we were really going to get our imagination flowing, we had to dig deeper into the edges of beer styles. We needed to invent new styles and reimagine old ones.

Annnnnd we had to make them good to drink.

As our first seasonal, we had to come out of the gates strong. Inspired by Duvel, Dapper Devil allowed us to play it a little safe with the raspberries (we knew that’d be delicious) while challenging ourselves to make it more than just a fruit beer. The Belgian character of the yeast, for some reason, is not as expressive at the lower pH. So we quickly realized we need to boost up the yeast character by adding some saison yeast to add a spicy contrast to the fruity flavors. The resulting beer was a real crowd-pleaser, and appreciable to those that want to dig a little more into complex Belgian flavors.

For our first mixed-culture beer, we sour-mashed a typical saison malt bill and fermented with both saison yeast and a strain of brettanomyces. This year, we have a couple exciting tweaks to Saison Puede. The spring version will have meyer lemons and pink peppercorns added. Then for the fall, we’ll age and funk the main batch in Infinite Monkey Theorem wine barrels over the summer before finally mixing in grapes and pomace from the annual grape harvest. We released a version of this at last year’s Texas Craft Brewers Festival.

Ah, Czech Czech, possibly our staff favorite.  Who’s ever heard of a sour-mashed Czech Pilsner?  Who thought it would be so damn refreshing and perfect for Austin summers?!  Technically one of our most challenging beers, Czech Czech even goes through a decoction mash as well as weeks of lagering.

This beer had to wait until we had a good grasp of what we call “The Peculiar Triangle,”  which is the balance between sour, bitter, and sweet. Three points on a triangle all trying to have some sort of balance. Hop Totem has a particularly difficult-to-balance Peculiar Triangle, as you can imagine, because both the bitterness and the sourness are so high. We have to hit our targets on IBUs and SUs just right and then set the residual sweetness in between them to make sure they play nice. But once we nailed it, what we got is basically a grapefruit IPA without the grapefruit!

What happens when you amp up the maltiness and body in a beer and incorporate a smooth, rounded sourness? Well, we didn’t really know until we made Wee Beastie. An unsuspecting crowd favorite, Wee Beastie doesn’t fully makes sense on your palette, but you can’t get enough of it. Fruity, caramelly, sweet, sour, a touch of peat smoke…so great for the fall months.

Ever since Professor Black showcased that sourness and roastiness could live together in harmony, I wanted to take it to the extreme. Big roasty malts, high alcohol, and a sourness balanced out by a smooth, sweet oatmeal backbone, the Admiral lives up to his name. We even aged a small amount in Balcones Brimstone whiskey barrels, which we called Lord Admiral Gravitas. Perhaps we’ll make a bit more of that this year.

So what does sourness mean to us? It means untapped possibilities, challenges, and rewards! No longer are we simply mimicking classic styles like Berliner Weisse, Gose, and Lambic. The added dimension of organic acids adding sourness to virtually any combination of ingredients and processes – that’s Blue Owl.

Want to keep talking about this sour business? Stop by the taproom and ask us over a glass!