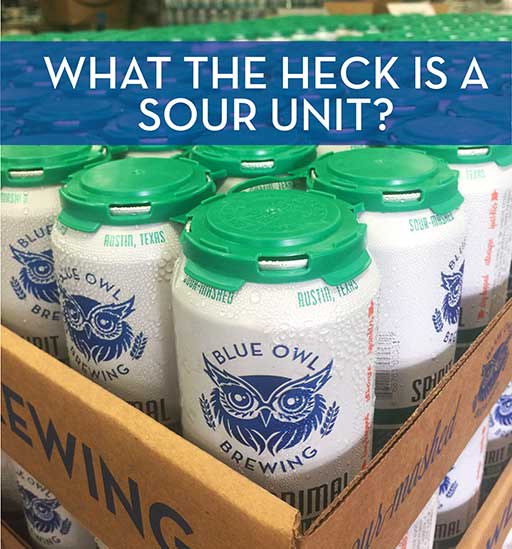 Our Sour Units© (SUs) are a measure of the level of acidity (and “sourness”) in a beer. During the sour-mashing stage of our beer production, we introduce wild cultures of bacteria into the wort and allow them to consume some of the sugars and produce acids. The dominant type of bacteria we select for is called lactic acid bacteria, which produces primarily lactic acid. As the level of lactic acid increases with time, so does the “perceived sourness” (more on that in a minute). 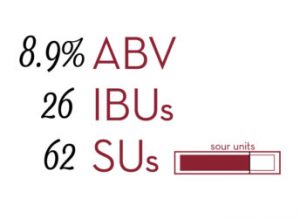 Our brewers sample and measure the amount of acidity in the wort using titratable acidity, an approximation of the total acidity of a solution that has long been used in winemaking. This measurement gives us the percent of acid (as lactic acid) in the wort, and we multiply the concentration by 100 to give us Sour Units. For example, a beer with 65 SUs means that 0.65% of that volume is lactic acid. Or,

Once the acidity reaches the target level for a particular beer, we stop the bacteria and continue the brewing process like “normal,” un-soured beers.

Sour Units are very similar to International Bitterness Units (IBUs) in that they measure the concentration of chemicals that affect your taste buds. As you would imagine, the more of the acid or bitterness compound, the more it affects the taste.  However, while SUs and IBUs can tell you something about the level of those tastes, but they don’t tell you everything. Your perceived sourness is something that changes with many other factors, like how sweet, bitter or carbonated the beer is, the types of acids it contains, and even what you ate or drank before you had our sour beer.

Our Sour Units are one of many tools for trying to give consumers some information about the beer they are about to try.  Simply put, SUs between 0-40 can be considered low sourness; 41-75 medium sourness; and 76+ can be considered a high level of sourness.

Don’t forget that our beers are constructed to have sourness be just one of many flavors in a beer.