Collaborations are as much a part of craft beer as odd-shaped glasses and punny names. Projects among various brewers allow the creatives to share their ‘style’ of brewing as well as learn about other brewer’s ideas and processes. Just like with two musicians pairing their particular sounds together, brewers collaborating on a beer should showcase what makes them unique as well as what their combined uniqueness creates in a beer.

Collaborations can, and should, stretch beyond just brewers and other brewers.  At Blue Owl, we like to step outside our daily creative circle and seek inspiration and an outside perspective. We’re a young brewery (we’re in our terrible twos now!), and that means we’re still learning about ourselves. To gain a wider perspective as we grow, we looks for collaborations that challenge us. To date, we’ve worked with one brewery, a cidery, a distillery, a winery, and a local sculptor. 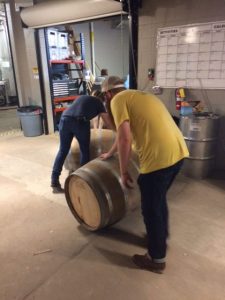 In creating Saison Puede Harvest 2017 with The Infinite Monkey Theorem Urban Winery and Ol’ Wee Beastie with Balcones Distilling, we tried to combine the essence of their particular beverage with our signature souring and brewing techniques. Not only do we need to think about the typical beer ingredients (malts, yeast, etc.) and how they marry with say, whiskey characteristics, but we also need to integrate sourness into the mix. We did this in two distinct ways.

Saison Puede Harvest 2017 is a farmhouse style ale fermented with a mixed culture, further aged in cab franc barrels with additional wild yeast, and then refermented with the spent grape skins (pomace) from a syrah grape wine fermentation done by The Infinite Monkey Theorem. The true collaborative part of this beer came when sitting down with Aaron Berman of IMT and learning the subtlety and complexity that needs to be balanced when grapes, acid, and barrel come together. It’s a rather ‘converging’ flavor that layers itself around the crisp tartness of the grape’s acidity.

As a contrast, Ol’ Wee Beastie is a sour wee heavy with fresh orange zest aged in barrels that housed a special whisky from Balcones Distilling called Brimstone. Brimstone is a smoky, rich, aggressive-yet-complex-fruity whisky that uses Balcones’ own secret method for smoking. The rich whisky flavor adds to the complex fruity, sweet maltiness from the wee heavy, but is balanced out with an assertive citrus sourness. The collaboration aspect of this project has been an in-depth understanding of how Balcones make such amazing spirits, and how acidity (not normally associated with whisky flavors) can be integrated with the sweet, malty, oaky flavors of Wee Beastie.

For a change of pace, we also like to actually collaborate with other brewers too!  For our series “Can’t Quit You,” we partner with our good friends over at Black Star Co-op, brewers Andy Martinez and YC. We didn’t exactly know where this collaboration was going to end up, but the initial idea was pushing the limits of hops, bitterness, and sourness. This is largely an unexplored facet of brewing.  Most sour beers have little-to-no bitterness and hop character. But that’s crazy!

Hops are, by most standards, the sexy part of beer. They lend amazing citrus, piney, resinous, spicy, and more recently, tropical fruit character that people crave. But what’s missing when you smell or taste that pineapple, mango, or passionfruit character in a hoppy beer? Acidity! Fruits are acidic. So, by combining a juicy, tart, and balanced sweetness in the malt, the fruity aspects of primo hops can be amplified and enriched. Our third addition to the Can’t Quit You Series is a Sour NEIPA that does just that – takes the tropical fruit character of Citra, Mosaic, and El Dorado hops, and makes it a truer, richer tropical flavor by integrating a whopping 95 Sour Units (that’s the most sourness we’ve ever put in to a beer)!