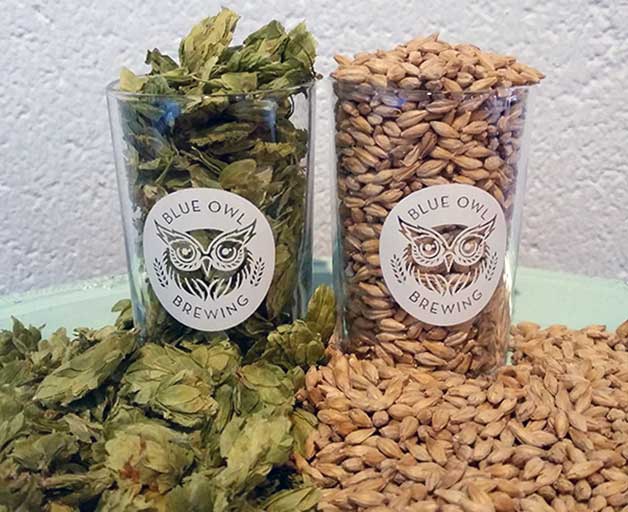 Hey everyone! We are so excited to be releasing our SMaSH SMash Series #1 on Friday, March 22! I wanted to write a blog post to talk about Smash beers, in general, and why we Blue Owl folks are so excited about this upcoming series.

SMaSH beers originally grew out of the homebrew community, it stands for Single Malt and Single Hop. They’re a great way to get the essence of the malt and hop character and flavor profile. Usually, when you brew a beer you use a blend of malts and hops to achieve specific results. Different malts can add different flavors and textures to your beer, while different hops can have different levels of bittering acids, flavors, and essential oils that in combination can present a really cool experience to the drinker.

When you brew a SMaSH beer, you’re using one malt and one hop. This means that you are not using a blend of malts and hops – you’re using one of each! This gets to the very heart of each ingredient, and there’s nothing to hide behind.

Here at Blue Owl, we want to see what happens to the flavor profiles when we put the single malt and single hop through our souring process! That’s where the second SMash comes in – it stands for Sour Mash.

We not only want to get to the heart of each malt and hop – we want to see what character of souring bacteria lives on the malt that can sour the beer. We typically use a very lightly malted pilsner variety of malt to sour our beers with. Not with SMaSH SMash! We use the naturally occurring bacteria on the malt we’ve selected as part of the SMaSH. So we might see some different souring levels and sour character as we grow the SMaSH SMash program and pick different malts and hops to play with!

We hope you love our take on these cool beers! We’re excited to challenge our knowledge about what flavor combos and sourness levels go well together, and we hope you’ll challenge yourself to try all three varieties of SMaSH SMash this year too!