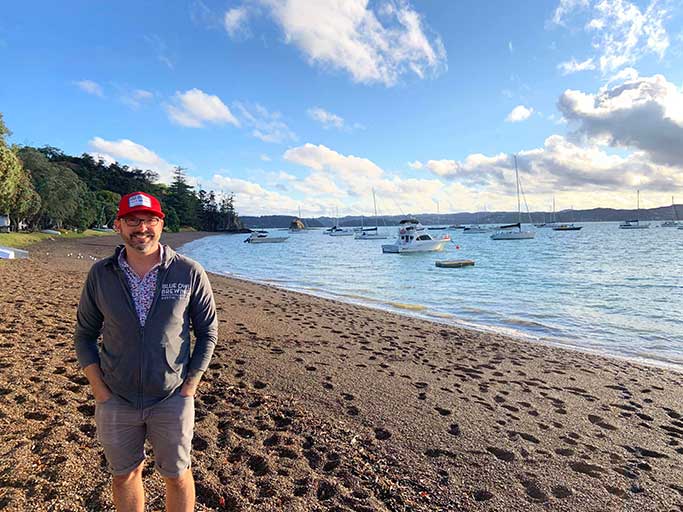 Be Unique. Drink Unique. That’s the motto of Blue Owl and I don’t think there’s a better representation of that sentiment than this year’s SMash SMaSH series.  A pet project of mine for over 2 years, I’ve been obsessed with everything New Zealand.  The tropical North Island.  The dramatic, rugged South Island.  The amazingly friendly kiwis (the people, not the bird, not the fruit).  The malt and hops!  I even spent my 40th birthday last December (their summer, mind you!) brewery hopping and sailing around the Bay of Islands.  But how do you represent all this in a beer?  You simplify and let the ingredients tell the story.  So let’s break down the name of the beer and describe how that’s the “formula” for this series.

One variety of expressive hop, one type of malt with no clutter, and all of it soured using our specific, unique sour mashing techniques.  Sure, SMaSH beers have been around for a while.  I’m sure you’ve had a Citra / some-usual-base-malt beer SMaSH beer.  More rare (I haven’t had one yet) would be a soured version.  Even more rare would be a Sour SMaSH that was soured using the natural microbes found on the grain that is used as the sole malt.  And finally, what if you used entirely New Zealand ingredients?  Hell. Yeah.  This year, we’re doing three different SMash SMaSH versions with 3 different New Zealand malts and 3 different New Zealand hops.
Single Hop
The star of any SMaSH beer is arguably the hop.  Brewers want to showcase a single varietal that has explosive flavor and aroma.  Citra, Simcoe, Galaxy, Mosaic are expressive hops, to list a few.  Enter: New Zealand hops.  Some of the most coveted of all hops are ones that hail from the Kiwi country.  They are rare and distinct.  You know when you’re drinking a beer with New Zealand hops when you start tasting the tropical, white-winey, lime zesty, and gooseberry character.  I find it very fascinating that much of the wine grown in New Zealand can taste so similar to the hops grown in the same regions. The hops we chose this year are Motueka, Wai-iti, and the most coveted of all the hops, Nelson Sauvin.  And at over 3lbs per barrel, these NZIPAs are going to be awesome!

Malt can easily be overlooked in a beer.  Just another basic ingredient.  Not in SMash SMaSH!  To make this a truly New Zealand Sour IPA, we went straight to source to procure Kiwi-grown and Kiwi-malted grain from our friends at Gladfield. This company makes amazing malts but also represents what it really means to be a Kiwi.  When I first reached out to them over 2 years ago, I needed just a couple pounds of their malt to test a theory I had about southern hemisphere sour mashing malts.  Not only did they immediately send me malts grown in various areas around the South Island, but their kindness, openness, and humor have made us friends ever since.  And guess what?  Their malts aren’t even available in the US currently!  They agreed to work with us on this SMash SMaSH series by directly shipping us a freight container full of malt half-way across the planet.  Without their time and patience (and I’m sure cut us a pretty decent deal to make this a reality), my passion project, 2 years in the making, would not have happened.  Thanks, Gabi and all :).  The three malts chosen to complement the hops in this series are (respective to the hops listed above): American Ale, Pale Ale, and Pilsner.
Sour Mash
To sour our beers, we use the naturally occurring microbiome found on the grain we use.  It’s kind of like making a sourdough starter, but for beer.  And actually, in all of our beers, you can taste a subtle lemony, sourdough flavor.  Just think, as the barley sits in the fields on the South Island that look like, well, the sets for Lord of the Rings, they collect bacteria and wild yeasts.  Those critical “bugs” for making sour mashed beer have traveled all the way to Austin, Texas!  For the truly unique thing about our souring process, we load up our M.I.U. (pronounced “mew” and stands for Modular Inoculation Unit) and allow the sweet wort from the Gladfield malt to gently wash over the same grains and harvest the microbiome of those New Zealand fields.
OK, I feel like maybe this blog was a bit “oh look how special this is.”  It’s hard to be so excited about a beer we’ve been designing for 2 years and not come off as a little boastful.  But my personal insecurities aside, I’ve never worked on such a pure and simple sour beer that relies so heavily on the quality and expressiveness of the two ingredients — malt and hops.  But those two ingredients rely so heavily on the people and country of New Zealand.  Amazingly unique and expressive hops, grains from the valleys of a beautiful countryside, souring microbes from the breezes coming down the mountains, and most importantly, the people like Gabi from Gladfield, these are simple-yet-unique things that made my little beer-dream come true.  SMash SMaSH Sour NZ IPA is a special beer and I hope you’ll try the three versions of it to see if one or more really speak to you and how unique you are.