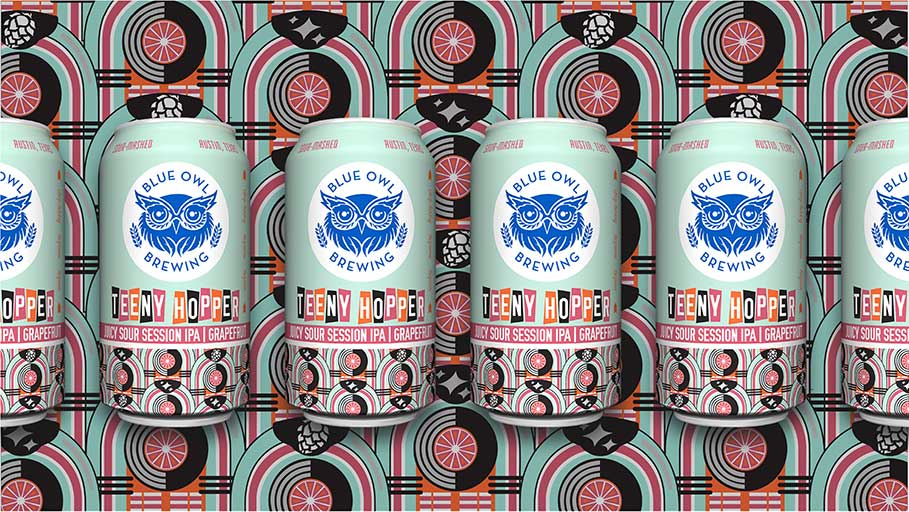 Let’s Go To The Hop!

This new edition to our sour seasonals will keep you movin’ and groovin’ all day long. Azacca, Amarillo, El Dorado hops, and Rio red grapefruit dance hand-in-hand, while our unique souring process and low abv make this juicy sour IPA as refreshing as it is sessionable.

Teeny Hopper is the result of our exploration of grapefruit and “juicy” hops that have a strong grapefruit attribute.  The sourness of the beer is an obvious amplifier to the grapefruit juice addition, but we go a little further and add some grapefruit peel to the whirlpool to get more flavor and just a touch of added bitterness (it is an IPA after all).  For the hops, it’s well-known that some pretty famous hops give off a lot of grapefruit flavor and aroma.  Amarillo is one such hop, but another new-comer to the hop game is Azacca which also has a big grapefruit nose with tropical fruit juiciness like mango and papaya.  And finally, to create a sturdy, juicy-sweet hoppiness, our go-to hop El Dorado lays the perfect foundation for the hops and grapefruit to jump out at you!  Weighing in at just 4.0% ABV, this sessionable IPA provides you with a bright, hoppy beer that you can drink all day.

After the name Teeny Hopper was presented, ideas for the can design came quickly. Diving into the theme of 1950s sock hops, we started looking into a bunch of imagery from diners and poodle skirts to music and dancing. Beginning with the sour beer name, we used iconic 50’s signage to get the vibe in place. We then landed on the classic jukebox image and integrated it into a pattern as the focal point of the design. Also, see if you can spot the grapefruit and hops snuck in as a reference to this juicy sour session IPA with grapefruit. For color, bright orange and pinks signify grapefruit, teal is used in a nod to the hops, and bold pops of black bring a vinyl feel and round out that classic 50s sock hop color palette.

Between can design and sour beer, you’re sure to get your fill of hops with Teeny Hopper in hand!

Teeny Hopper will be available in Blue Owl’s tasting room on draft and to take home in six-packs. So dust off your favorite 50s record and look

out for its release on Friday, October 16th.