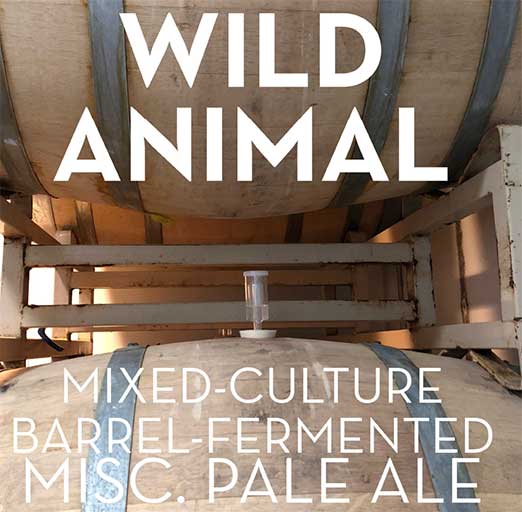 We’ve spent the last couple of years working to make sour beers approachable. Our sour-mashing process produces a “clean” sourness that allows the style of beer to shine through. If you’re drinking a sour pale ale, for example, it should still taste like a pale ale.

But we’re always looking to push the boundaries of what sour-mashing can produce. Where can we end up, even when starting at the same place?

Wild Animal is unlike anything we’ve made before. It’s the first full batch offering from our barrel program using our own house mixed-yeast/bacteria culture. We started as we always do, by using bacteria from the grain to sour our mash (the mix of grain and water that is the start of every beer), which for Wild Animal included a healthy dose of rye malt. But instead of moving it to stainless steel tanks as we normally do, we transferred it into French oak barrels for fermentation.

That’s where we added our house culture, a mix of saison and brettanomyces that we’ve been cultivating over time. We then let the beer sit in barrels for almost six months before blending about half of the overall batch. Lastly, we dry-hopped with Kohatu hops from New Zealand, a newer hop that we’ve been experimenting with and really digging.

The result is one of the more complex beers we’ve made. It’s funky – there’s no doubt about that. But it still retains many of the characteristics you’ve come to enjoy from our our beers. It’s stylistically recognizable as a pale ale, but with a big hit of tropical fruit on the nose from the Kohatu. We think you’re going to like it.

Wild Animal is 5.7% ABV and 43 Sour Units. It’ll be available on draft in the taproom and around town, and in a limited run of cans very soon. We’re looking forward to hearing what you think!