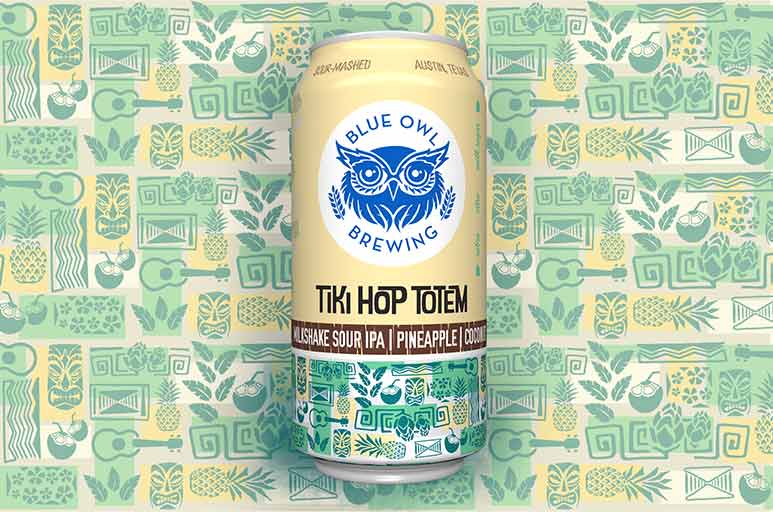 We’d like to give you a peek inside the fun, creative process of designing a new beer, from concept to packaging.  This involves many people and is generally seen as the best part of working at a brewery! There are lots of ways new beers ~can~ emerge, but Tiki Hop Totem followed a more typical concept-prototype-branding sequence. Although the different steps have different considerations, they still often happen in conjunction with each other.  For example, if ingredients change during the test-batch prototyping state, the can design colors or wording will shift as well to determine the best way to illustrate the ~feel~ of the beer on the label.
In the initial stages, the concept for a new seasonal is dreamed up by Executive Brewer, Jeff Young.  He weighs different inspirations, seasonality, the marketplace, and access to ingredients, among other factors. For Tiki Hop Totem, an off-shoot of our previous Sour Citra IPA called, Hop Totem it made sense to take the best part of modern hops (tropical fruit juicy-ness) and amplify them with actual tropical fruit! Citra hops have a strong, natural pineapple character, so having bright acidity from the sour-mash and actual pineapple juice just adds up.  Sabro, a recent addition to trendy hops, is known for having a big, coconut flavor and aroma.  Combine that with actual coconut and milk-sugar to smooth out the mouth-feel and sweetness, and you get the classic piña colada flavor combo in both a hoppy IPA form and sour fruit beer!
Next, we move in to test batches and prototyping to try to match the intended flavor concept with our expertise in the brewery.  Enter our Head Brewer, Meike.  She says of this beer:

“One thing that is crucial to making great beer right out the gate is lots of test batches. This year we made

as many test batches of Tiki Hop Totem as we could cram into our calendar to ensure that the first run to get to our customers was perfect. Our goal was to bring you the quintessential milkshake IPA with pineapple and coconut, inspired by piña coladas and tropical beach resorts.

As we iterated, we tried experimenting with lots of different variables. These variables include amounts and types of hops, as well as when they’re added (we’re talking double dry hop here). We also wanted to test how much pineapple and coconut would knock your socks off, but not blow your taste buds out (so you can enjoy can after can after can). And, finally, we messed around with textures. Adding lactose to a milkshake IPA is THE rule, but we weren’t sure how much we could add. We kept stepping it up and up! Finally, we settled on as much lactose as we could reasonably afford to put into a beer which means this beer has a fluffy, pillowy mouthfeel that mimics the breeziest of blended piña coladas.”
During both of the previous two steps — concept and prototyping — our branding team led by Elsie is coming up with colors and concepts to help illustrate our intentions to the beer drinker.  Of the beer branding, Elsie says:

“Matching the packaging of this new seasonal to the style and name offered a lot of fun options!

If you look into Tiki culture, it works great alongside Blue Owl’s branding, especially around its height in the ’50s & ’60s.
After pulling different Tiki patterns for inspiration, the Blue Owl team weighed in on each of our favorites. From there, I created illustrations that reference not only the tiki-style but also the style of sour beer being brewed. You’ll notice some hops, pineapple, and coconut illustrations, all of which are ingredients in this sour beer. The color palette being greens, yellows, whites, and browns also tell the story of Tiki Hop Totem. Each is a prominent color of the ingredients while also giving it that 60’s vintage, Tiki Bar style. These colors definitely speak to those “piña colada on the beach” vibes!
We went all-in with this design, everything tiki down to the font! Even the descriptor band mimics a tiki wood-carving, and the car-dash hula ladies up the spine of the can are some of my favorite touches that push this can in a different and exciting direction.”
Tiki Hop Totem will be available in 16oz four-packs to-go at Blue Owl’s tasting room as well as around town and greater Texas.
Look out for its release on Wednesday, July 29th. This tropical tiki beer is sure to have you swinging in the hammock!